Faced with the multiplicity of factors that determine the loss of a strong and distinct national identity, it seems only appropriate to look into the elements that may be ascribed to an Italian way of conducting research on contemporary jewellery, to reflect on the existence of a peculiar syntax, of an approach that may be defined “Italian”.
Since the late fifties continuous and serious research has been carried on in the city of Padua, with a few exceptions in the persons of the Pomodoro brothers, Arnaldo and Giò, and the activity of the Turinese Bruno Martinazzi. It is the School of Padua that mainly represents our country in the international ambit. It is in the teachings of Mario Pinton that it is possible to trace the aspect unanimously considered as being “Italian”: the need for a continuous creative experimentation of the craftwork culturei. In various writings the master stressed the importance of the technical phase as the creative phase, the planning character that is developed during realisation: “the evocatory value of the matter must be listened to as an expression of its metallic nature”; “the modus operandi must be understood as an emotional adhesion to the feasible, planning and technological procedure”.ii Technique is not disjointed from art, from creativity, but takes on a centrality that even etymology seems to confirm: the Greek word téchne has as its Latin equivalent the word ars, which has become the Italian word arte (English art). “The perpetual dialogue of Italian art with its ancestors”iii another element of being Italian (italianità), is also found in the thought and teaching of Pinton. The master has always indicated how the knowledge of past techniques was a starting point for combining the emotional aspect with a logical, simple, rational elaboration. As a matter of fact, in the history of Italian jewellery research there is no proclaimed rejection of tradition, a clean sweep, like what happened, for example, in the sixties in Holland. The Italian way is mainly configured as a reformation of the concept of jewellery, made topical through a revision and re-writing of tradition.
Those parts of Italian research that are essentially identifiable in the importance conferred on the technical aspect of jewellery as a creative phase, in the recovery and re-interpretation of ancient techniques, can be found in the works presented in this exhibition. United by traditional technical training, conducted in the Goldsmithery Department of an art institute or at goldsmith’ workshops, the nine artists formulate their research by confronting themselves principally on gold and silver, and elaborating, from a common syntax, their own discourse on jewellery.

Post modern poetics can be traced in the Adrean Bloomard’s exhibit-jewellery re-emerged from oblivion, and in the reconstructions of Fabrizio Tridenti, deflagrated scenarios, compressed, magmatic, from industrial archaeology. Gold as a malleable material is the protagonist of the pieces by Patrizia Bonati, who moulds it to create interchangeable jewellery: an earring can also be worn as a brooch, a necklace can become a bracelet; gold again in the works of Lucia Davanzo but also oxidised silver, in the form of threads, coexist to accentuate their chromatic contrast. The arrangement composed of elements that are repeated with subtle variations, characterise Elisabetta Dupré’s pieces, whereas the play of formal respondence enlivens Maurizio Stagni’s works. Suggestive effects emerge from the dialogue between the materialness of the coloured resins and the marks made on the metal by the oxidation and gold dust in Maria Rosa Franzin’s jewellery. The accentuation on the material component can be found not only in the brooches Ciottoli by Stefano Zanini, that seem to be centred on the nature-device relationship, but also in Rita Marcangelo’s works pervaded by the tension between rigidity and casualness.

“The exhibition “Italian contemporary design” tells about masters of jewellery and masters of design,but also about youngs designers, international companies and small family businesses to highlight the excellence of Italian jewellery in using techniques and materials peculiar to made in Italy, from coral to filigree, from micromosaic to lava stone.” 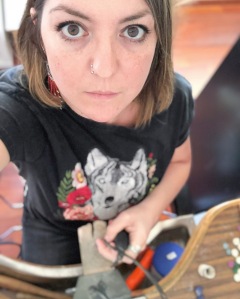